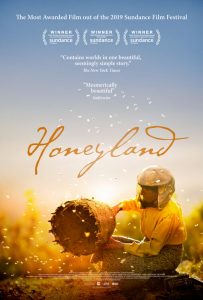 “An experiential wonder, a cutting critique on capitalism and a genuine must-see.” – Rolling Stone

“Tells the story of a forgotten place so strange that most Westerners couldn’t even imagine it.” – The Hollywood Reporter

Nominated for two Academy Awards for Best Documentary Feature and Best International Film – the first time in history that a film has qualified for both categories – and the most awarded film at the 2019 Sundance Film Festival, Honeyland is the story of the last female bee-hunter in Europe must save the bees and return the natural balance in Honeyland, when a family of nomadic beekeepers invade her land and threaten her livelihood.

“Part fly-on-the-wall anthropology, part ecological fable…its implications for all of us, about how easy it is to upset the equilibrium of the universe, are huge.” – The Washington Post